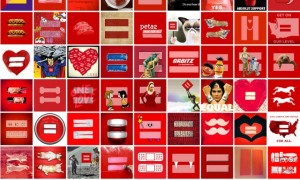 Because the feel of this entire blog is largely ridiculousness, I hesitated to to write about this here, but my heart is hurting so, I feel that I must.

Last night, one of Caolinn’s best friends tried to come out to his parents. In his usual, brilliant, witty, amazing way, he tried to make it easy and sweet, and he (and we) were all hoping for a loving and caring reception to his moment of brave honesty, but what happened instead, was that his parents yelled at him, berated him, told him that they wouldn’t accept it, that he wasn’t allowed to be gay under their roof, and threw away the gift he gave them. As a parent, as someone who loves him, and as a human being who isn’t an ignorant bigot…my heart broke, not only for him, but for all the kids who have faced the same response or worse. We’ve told him that our phones are on, and if, at any point, he needs us to come get him, day or night, we will, but it doesn’t feel like enough.

What I really want to do is bang down his parent’s door and tell them… Your son is brilliant, tall, handsome, and funny. He speaks more languages fluently, at sixteen, than I can say “hello” in at forty. He can program a computer, design a robot, once founded his own micro-nation (legally…I kid you not), and is a loyal and true friend. He’s also gay. And you don’t deserve him.

Thank you for listening to me, guys…I promise I’ll be happier tomorrow.  Probably because I stole their kid and egged their house.

84 thoughts on “My Apologies…This Is Going To Be A Rough Ride.”