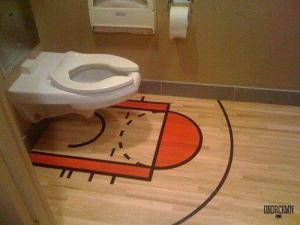 One of my largest conflicts in parenthood, has been in toeing that thick, fat line that lies between hovering over my children like some sort of demented helicopter, and flinging those little suckers out of the nest, while screaming, “Fly, you little bastards, fly!” Sometimes, I walk the line artfully…but, usually, it’s more drunken sailor than Wallenda Brother.

One of the areas in which I have struggled the most, was in letting them use public restrooms alone. Try as I might, I cannot get past the idea that, behind every men’s room door, lies a mustachioed creeper, just waiting to offer my sons candy, but on the flip side, my sons were definitely heading into their own gray area, where they were leaving the “Oh, aren’t they cute,” stage, and rapidly heading into “Why are those man-children in the women’s lavatory?”.

By the time they were eight, my resolve on the issue vacillated, depending on the sketchiness of the bathroom in question. Nice restaurant…no problem! Inner-city Costco…no fucking way on this Earth. Finally, there came a day in which my sons hit a tipping point, where they were no longer Ladies’ Lounge appropriate.

Liam: “Mooooom, the machine took my penny!”
Me (washing my hands): “What machine?”
Liam: “The one that sells tampons. And I didn’t get a tampon, and it took my penny! What IS a tampon anyway?”

6 thoughts on “I Need To Stop Writing About Toileting Issues (and, shut up, spell check, it is to spelled that way! wait…to or too? nothing looks right…awww fuck it)”