Soooo, in a stunning display of the grace and dignity that can only be mustered when you are a McMcerson, my darling mother, an absolute gazelle of a woman, tripped over her own feet and went down hard, taking out her own arm and shoulder, which, in her own words, “Went in a direction that I never want to see an arm ever go again”.

Believe me, if there is ever a time that you don’t want to be surrounded by cute firemen being exceedingly nice to you, it’s when you or someone you love is hurt.  I could have had January through December on the P.F.D. calendar, and the whole experience still would have been a complete boner-killer.

Following her ambulance to the nearest hospital, I had just enough time to call one of my best friends (an ICU physician on the east coast), who advised me that, “They start all the new residents in July!  Most of them kill more effectively than ebola.  Do NOT let any of those Doogie Howser fuckwads lay a hand on her!”

Many hours in the ER later…physicians consulted (and checked for actual gray hairs and crow’s feet, prior to treatment), meds given, x-rays taken (by a lovely man sporting a Juggalo tattoo, who was shockingly gentle and kind-hearted given his musical taste), and one attempt at putting her shoulder right…the decision was made that the damage was significant enough to warrant admission for surgery, in the morning. 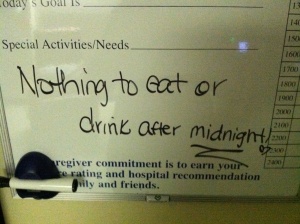 I knew it…my mother is a friggin’ Gremlin.

8 thoughts on “Yeah…So That Happened.”